This Baylor team is making a name for themselves by taking down serious rivals in Texas and has risen to the top in recent competitions – and no, it’s not the football team.

This team wields swords, not pigskin, and wears facemasks instead of helmets. Baylor’s fencing team may not be the most well-known club on campus but now, after a string of triumphs, they are walking a little taller and keeping the fencing community en garde.

In the spring and fall of 2013, Baylor’s fencing club won first-place honors at two Southwest Intercollegiate Fencing Association tournaments, beating teams from the University of Texas at Austin, Texas A&M University and the University of Houston. This feat is all the more impressive, said Highland Village junior Matthew Brinzo, considering Baylor’s team has not had a professional coach for almost five years.

“We’ve always considered ourselves the underdogs,” said Brinzo, one of the fencing club’s captains. “I have a fencing background, and I’m kind of the closest thing we have to a coach. Other than that, we learn from each other.”

Three times a week this group of 20 to 30 untrained fencers gathers at Russell Gymnasium, waits for the floors to clear and transforms basketball courts into a dueling school. The instructors are also the students and a centuries-old sport is brought to life on campus.

Because the group is completely self-taught, Brinzo said experience before joining the club is not a requirement. New members need only show up with a hint of an interest and current members will take it from there. Members are also not required to buy any gear and being a Baylor student is not a requirement.

Dr. Michael Long, professor and division director of Asian and African languages, is one of a few Baylor faculty members that has practiced with the team. He became involved with the group back in 2008 and his role has evolved from casual member to faculty sponsor.

Long said the fencing club’s system of support described by Brinzo is what sets the team apart and makes the team deserving of recognition on campus.

“They are a very tenacious and dedicated group of people,” Long said. “It is a constant struggle for them to go to practice and keep up with studies while teaching and learning from each other. They are a very cohesive and encouraging group and that’s why they’re successful.”

Long had no experience with the sport of fencing before becoming a faculty sponsor but said he always admired the sport during Olympic coverage because of its elegance.

As for why anyone should consider learning the art of fencing, Long said the sport is an excellent way to exercise mental skills as the game is psychological. It is also ideal for what Long calls unexpected “James Bond” moments.

“You never know when someone will throw a sword at you and you will need to know how to use it,” Long said.

Since experiencing that welcoming atmosphere created by the group, Long has stood alongside the group, encouraging and praising the team as they have worked independently to turn amateur fencers into prize champions.

“In spite of not having a coach and having to balance funds, they are still quite successful,” Long said. “It’s a learning experience and it doesn’t matter whether you win. It’s the experience and it helps build character, camaraderie and gives Baylor recognition.”

The team’s next tournament will take place Feb. 22 in San Antonio where they will again face professionally trained competitors and attempt to prove heart and determination trumps all their shortcomings. As for new members, the opportunity remains for students and faculty to join year-round by visiting Baylor’s campus recreation website at baylor.edu/campusrec/clubsports or going to any of the club’s practices.

Raymondville junior Karina Samudio said the club’s cohesive atmosphere has been the catalyst that created a large part of her Baylor circle of friends.

“When I came to college I didn’t think I would be in any clubs, but freshman year I saw the chalking outside the Russell dorms,” Samudio said. “When I figured out I could play with swords while going to college, I kind of geeked out,”

Two years later, Samudio is the club’s vice president and said her closest friends are fencers. Among those friends Samudio includes Long, who she said is great to talk to and supportive of the group. She also said her experiences have fueled her desire to continue with the sport long after she leaves college.

Samudio said she is not one to zealously claim school spirit, but when the team defeats schools like Texas A&M University in tournaments, is when she and her teammates do the “Sic ’em” and are teeming with school pride. Texas A&M’s team is usually the one to beat each year, Samudio said.

According to the Texas A&M fencing club’s website, the team has a history of fencing that dates back to 1905 and has a designated meeting space for their fencing club in the school’s physical education activity program building.

Though Baylor’s fencing club works with less resources than other schools, Baylor was once a pioneer in the sport in the 1940s. According to the Central Texas Genealogical Society, Alvin Adelman, class of 1942, attended Baylor on a fencing scholarship and became the first person in national collegiate history to win first place in three categories of competition.

Samudio said this important piece of history lives on through the Alvin Adelman Memorial Tournament. The event is held by Baylor’s fencing club every September to honor Adelman and is a main source of fundraising for the team.

As the glory days of the fencing club return, Kingwood junior Jacque Clark said she encourages people to come by and watch the club during practice from 6:30 to 9 p.m. during Tuesday and Thursday practices or 2 to 5 p.m. on Saturdays, all of which are at Russell Gym.

Clark, who is also the newly elected fencing club president, said practices for her have become a source of relaxation and escape from her hectic school schedule. Fencing club is a place where she can leave her problems at the door or bring them with her and be comforted by the close-knit community, she said.

“We’re basically a big group of friends,” Clark said. “We’re a unique sport, not a lot of people know that we exist or think about fencing in general. But there are a lot of unique, intelligent and awesome people here. People can come, try something new and say ‘I’m a sword fighter.’” 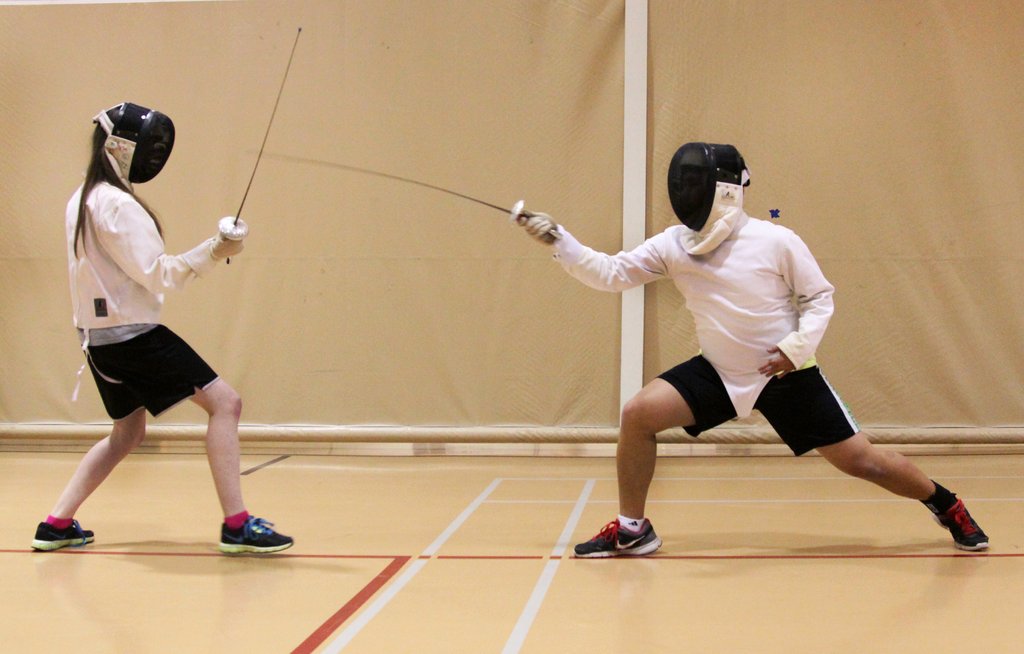