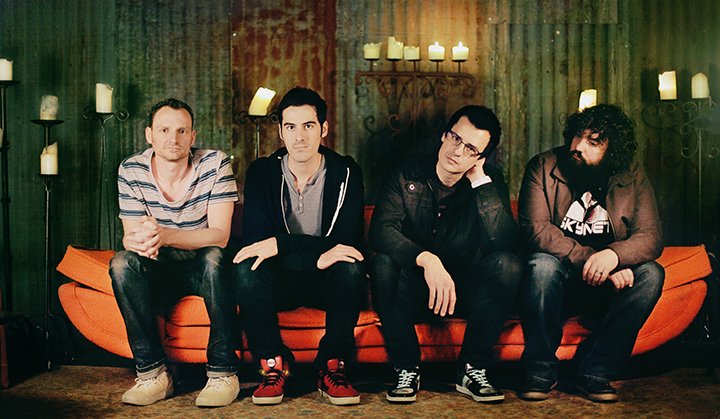 Note: Hover over the image for official Digital Age music videos and behind the scenes look at the recording of their album Evening:Morning.

Death is usually associated with sadness, mourning and finality. However, for The Digital Age, death is just the beginning.

In its debut album, “Evening:Morning” released on Aug. 13, the band, formed from members of The David Crowder*Band, explores a journey from darkness to light, both with the Christian walk and in their own faith.

“As Christians, we see things die and come back to life,” said Mark Waldrop, guitarist and vocalist. “Initially, there’s lots of feelings of fear, but for us it very quickly turned to excitement.”

After the DC*B called it quits in 2012, the four remaining members picked up where it ended following DC*B’s swan song, “Give Us Rest,” a double-disc, 34-track requiem album.

Following the wrap of the last DC*B album, extensive construction on their downtown Waco recording studio resulted in a quarter-year hiatus. The members of the band took time to regroup without picking up their instruments, which gave themselves distance to discover why they make music and why they play together, Waldrop said. After talking it through, they all came to the same conclusions and thoughts, jump-starting their desire to record music as a new unit.

“I think just the space between the David Crowder Band and the Digital Age really helped us reform and form new thoughts,” he said. “Every day we’re figuring out more and more of that plan. We still don’t know exactly, but we’re trying to be faithful and trying to do what we know how to do.”

Playing and writing music together again felt right, Waldrop said, and they knew God had plans for them to keep it going without forgetting their origins.

“We’re not trying to be explicitly different than the David Crowder Band,” Waldrop said. “We’re still writing the same way and playing the same.”

Their album was produced completely online via a private server. The name stems from their interest in the digital element that a band could now make a record without being in the same place. On a larger scale, the same digital connectivity could apply anywhere, Waldrop said.

“We wanted our music to reflect that we’re all connected, especially as a church and as worshippers,” Waldrop said. “What we do can affect people around the world, and that’s a really important distinction about living now.”

As a concept record, “Evening:Morning” is a representation of the figurative Christian walk from death to life and new creation.

“Every song corresponds to an hour in the night,” Waldrop said. “If you follow the lyrics, they take you on a journey from night to morning.”

The whole concept and reason for the record, Waldrop said, was because it connected with what the band was going through as artists and as people. He noted that The Digital Age is not the end of a band and the start of a new one; it’s simply a transition.

“It’s a story that’s really special for us as Christians because death is not the end of things, and that’s something we get to see from a different perspective,” he said.

With an eclectic mix of genres such as bluegrass, sing-a-long and synthesized sounds, Waldrop said the record has a little something for everyone with both louder and muted songs. From the fast-paced single “Captured” to the mellow tones of “All the Poor and Powerless,” The Digital Age draws inspiration from Mumford & Sons, Fun. and Radiohead, all while paying homage to its extensive past with the David Crowder*Band.

“It’s unique in concepts, but it’s also unique in that it’s the first record with just us four,” he said. “We want our music to sound like something that we’d want to listen to, so being next to Baylor and giving concerts definitely reflects the genre that we write into.”

As self-proclaimed Baylor fans to the core, Waldrop said the band’s deep roots in Bear Country heavily influence the way they make music.

“I think just being in a different space than where the majority of worship music is coming out of in Nashville drastically changes our sound,” he said. “We’re trying to write music that college students will dig and that they’ll listen to.”

As a longtime DC*B fan, Keller senior Courtney Roberts said The Digital Age’s simple-worded harmonies with light and happier notes was a transition from their traditional worship sound into Christian radio music.

“I can see how it fits the style of the last David Crowder Band album but more light and upbeat,” she said. “It’s really soothing to listen to.”

Their “Evening:Morning” Tour with Bellarive kicks off tonight at University Baptist Church, a nod to where it all started for them. From there, the band will tour all over the country, spreading its new sound and instrumental concepts as well as playing DC*B favorites.

Regardless of where God leads it next, The Digital Age, Waldrop said, is eager and ready to experience this new transition in both their music and their lives. The band hopes the album connects with people who are experiencing transition and explicitly portrays through each song that God’s joy comes in the morning.